Book Review: Put Me in a Book 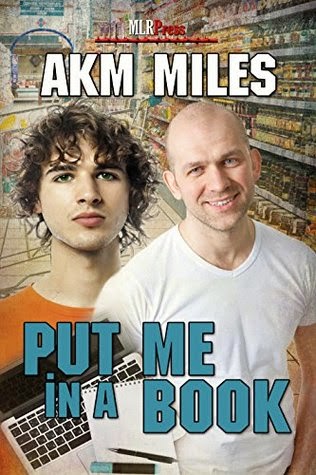 Title: Put Me in a Book

: 3 out of 5 keys.  Sex supports the romance and suits the story well.

Cover Impressions: I like the look of it, but I don't picture Rhine like that at all.  I think he looks very young here.

Best Line: "For once he was able to look at his body without shame, because Rhine was right there looking at him with such love and desire."

Synopsis: Brandon Reese thinks there are too many big reasons why he and Rhine Walken can't have anything other than a friendship, but Rhine thinks differently.
Brandon Reese isn't ugly, but he thinks he is. He knows he looks better now that he's lost over 200 pounds, but he can't get over feeling, well, less like the handsome men he writes about in his gay romances. Then he meets Rhine Walken. He's intrigued. But the next time he sees Rhine there's something really wrong with the young man. Like really. Brandon finds out that Rhine suffers from a traumatic brain injury that manifests in a strange manner, one that makes a relationship pretty much off the table. Damn that sucks. B ecause he could love this man.

Impressions: I've been impressed with some new MM books coming out with very different MC's.  I love seeing various facets of the queer community reflected in stories, especially when it is still a romance story (Shaking the Sugar Tree by Nick Wilgus comes to mind.)  In this novel, Miles takes on two less commonly represented elements of our communities, survivors of traumatic brain injuries and weight loss surgery patients.  I admire the sensitive way that both of these issues were tackled by Miles.

Rhine is a very moving character, and my heart ached for him and the hand that he had been dealt.  Truly a man on his own, he keeps fighting for normalcy, at least his new normal, and I really admired that.  At the same time, he is a man, with the desires and hopes of a man, and I wanted him to have a chance to see those dreams come true.

Brandon is a man built into a prison of his own fears and self doubts.  As a woman who had WLS, I could identify with a lot of Brandon's fears and issues, and I think in part it made him frustrating to me at times.  I wanted him to just get past some of his hang ups, while at the same time I had a lot of compassion for them.

This story was very engaging and it moved along very quickly.  I loved reading about these guys, and as much as I wanted to smack some sense into Brandon, and wanted to give Rhine a hug, I felt like they were both very realistic and compassionate characters.  If you like AKM Miles (and who doesn't!?) you will recognize the sensitivity and caring that is written in to each page.

This review posted on Goodreads and Amazon.