New Release 5* Review: Kidnapped by the Pirate, by Keira Andrews 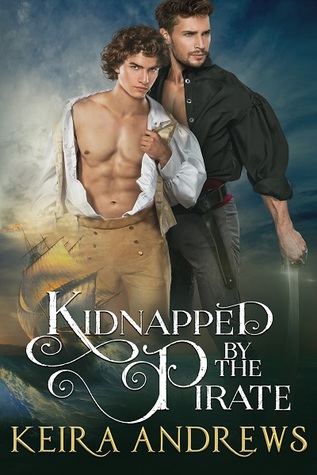 Title: Kidnapped by the Pirate


Lock this book up: 4 keys…like a treasure chest!  This book is HAWT.


Cover Impressions: Do you need to ask?  It is amazing!


Synopsis: Nathaniel Bainbridge is used to hiding, whether it’s concealing his struggles with reading or his forbidden desire for men. Under the thumb of his controlling father, the governor of Primrose Isle, he’s sailing to the fledging colony, where he’ll surrender to a respectable marriage for his family’s financial gain. Then pirates strike and he’s kidnapped for ransom by the Sea Hawk, a legendary villain of the New World.

Bitter and jaded, Hawk harbors futile dreams of leaving the sea for a quiet life, but men like him don’t deserve peace. He has a score to settle with Nathaniel’s father—the very man whose treachery forced him into piracy—and he’s sure Nathaniel is just as contemptible.

Yet as days pass in close quarters, Nathaniel’s feisty spirit and alluring innocence beguile and bewitch. Although Hawk knows he must keep his distance, the desire to teach Nathaniel the pleasure men can share grows uncontrollable. It’s not as though Hawk would ever feel anything for him besides lust…

Nathaniel realizes the fearsome Sea Hawk’s reputation is largely invented, and he sees the lonely man beneath the myth, willingly surrendering to his captor body and soul. As a pirate’s prisoner, he is finally free to be his true self. The crew has been promised the ransom Nathaniel will bring, yet as danger mounts and the time nears to give him up, Hawk’s biggest battle could be with his own heart.

This May-December gay romance from Keira Andrews features classic tropes including: a tough alpha pirate too afraid to love, a plucky virgin captive half his age, enemies to lovers, first-time sexual discovery, and of course a happy ending.

Impressions: Keira Andrews is an auto-buy for me, and when I saw the cover reveal and the title of this release, all I could do was make grabby hands at my computer screen.

I was not disappointed for one second.

This could have been just a scrumptious tale about pirates from Andrews and I would have been glued to the page, but in fact I found it to be even more.

Hawk is a great character.  He is a classic misunderstood, domineering man who yearns for the companionship of a lover.  He seems commanding and yet fair to his men.  He is educated and self-motivated, and he has been done a great wrong that he yearns to address.  He was easy to love and I wanted him to get his much deserved HEA.

Nathaniel was so much more than the perfect man for Hawk.  Nathaniel was not just a softer, younger partner for Hawk; he was far more complex and he is where Andrews went about and beyond for me.

Nathaniel has a vulnerability to him, and an innocent naivety that makes him so endearing.  He isn’t a weak parody of a swooning Victorian.  He is strong, agile, and skilled, and yet also so sheltered and isolated by his circumstances.  Andrews seized on a great opportunity to make him more than a 2D foil for Hawk, and in his creation she made a wonderfully complex character that really drew me right into the page.

The setting of this novel is gorgeous, and this story pulls you in right from page one.  Plan on a very late night (trust me!) or a wrap yourself up in a comfy spot and get ready to escape into Hawk’s crew.  In the end, you will be the one Kidnapped by the Pirate(s)!