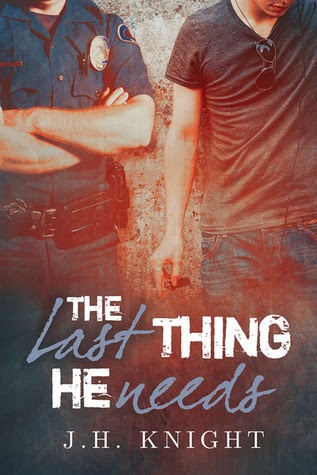 Title: The Last Thing He Needs

: 4 out of 5 keys.  Very sexy and hot, but totally in support of the story line

Synopsis: Tommy O’Shea is raising his seven younger brothers and sisters without any help from his drug abusing father and stepmother. Since he was fifteen years old, he's managed to keep the children fed and out of foster care. It takes up every ounce of his energy and the last thing he needs is romance complicating his life further.
Rookie cop Bobby McAlister doesn't belong in Tommy’s harsh world, but Tommy can’t push him out. As their unlikely friendship turns into a tentative relationship, they weather the daily storm of Tommy’s life with a lot of laughs and more than a few arguments. Tommy isn't used to trusting outsiders, and he's never asked for help in his life. But when a tragedy strikes the O'Shea family and threatens everything he's fought for, he'll have to learn to do both to recover from the brutal hit.

Impressions:  This was a great book!  I was excited to read it based on the blurb, and it never let me down.  Tommy's character is great, and I found him to be very realistic and three dimensional.  His struggles to take care of his family are admirable, and all too real for many people.  Bobby was a complete sweetheart, and I felt that his struggle to not overwhelm Tommy, coupled with his desire to "swoop" in, really showed a lot of depth to his character too.  I felt like they were both people I knew and "got."

Knight wrote in 7 siblings in Tommy's family and did an amazing job giving them individuality and making them three dimensional.  Even more amazing, they were also clearly a family, and that always resonated with me.

This was definitely a story that I never wanted to end.  I would love to hear more about how these guys, and their siblings, do.  (Or Ben?!)  Overall, just a great read that I totally recommend!

This review posted on Amazon and Goodreads.