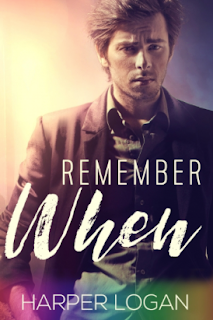 Synopsis: When Cuke awakes in the hospital, a piece of him is gone. Three years have disappeared from his mind, and he’s doesn’t even recognize his life - or the people in it. And then there's this super hot guy who appears to be his boyfriend...

Bouj will never be able to erase the memory of Cuke's skull cracking against the pavement during a typical game of basketball. He'd do anything to help his roommate piece his life back together, but he runs into an awkward situation when Cuke seems to think Bouj is his boyfriend. He knows he should correct his friend's mistake... and yet, something stops him.
Will Bouj realize that his feelings for Cuke run deeper than heterosexual affection? And even if they find love in each other's arms, will Cuke ever remember how they got to this point?
(Remember When is a is a 50,000-word steamy M/M friends-to-lovers romance with low angst, no cliffhangers, no cheating, and a guaranteed happily ever after!)

Impressions: This book was a greta way to stay warm during the insanely low temperatures we had in Boston.  I read it in one day, mostly because I really liked Cuke and Bouj, and I wanted them to get their HEA!

I love a good amnesia story, but what I particularly liked about this one is that it didn't play on the old lies or misunderstandings.  I never lost my love for Bouj, and I loved how sweet and open he was as he started to learn more things about himself and Cuke!  This was the best of amnesia +GFY or (OFY!) and I loved every minute of it.

There was a subplot that I didn't connect with as much, partly because it's not something I usually like in books, but I don't want to give it away.  I don't think it was necessary to the story, and it didn't detract from my love of the characters at all.
Posted by Danielle at 5:47 PM No comments: