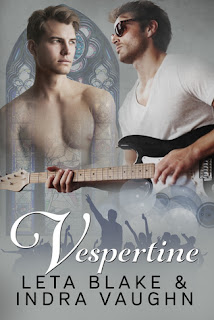 Lock this book up: 3 keys.  The sex is SO hot and so worth the slow burn.

Best Line: “I always loved you.  I can’t even pretend that I loved God more.”

Synopsis: Can a priest and a rock star obey love's call?

Seventeen years ago, Jasper Hendricks and Nicholas Blumfeld's childhood friendship turned into a secret, blissful love affair. They spent several idyllic months together until Jasper's calling to the Catholic priesthood became impossible to ignore. Left floundering, Nicky followed his own trajectory into rock stardom, but he never stopped looking back.

Today, Jasper pushes boundaries as an out, gay priest, working hard to help vulnerable LGBTQ youth. He's determined to bring change to the church and the world. Respected, admired, and settled in his skin, Jasper has long ignored his loneliness.

As Nico Blue, guitarist and songwriter for the band Vespertine, Nicky owns the hearts of millions. He and his bandmates have toured the world, lighting their fans on fire with their music. Numbed by drugs and fueled by simmering anger, Nicky feels completely alone. When Vespertine is forced to get sober, Nicky returns home to where it all started.

Jasper and Nicky's careers have ruled their lives since they parted as teens. When they come face to face again, they must choose between the past's lingering ghosts or the promise of a new future.

Impressions:  There was so much in this book to recommend it, and I know it will be on my short Banned in Boston list of books that I will reread over and over again.  It is just a very special story with two very special MCs.

I went to a Jesuit university, and as a young LGBT leader on campus, I expected to have an adversarial relationship with the members of the clergy.  What surprised me was not only how supportive they were, but that several of them were gay- and openly so.  Like Jasper, they made a commitment to their beliefs, and they had no problems balancing their own identities with their calling.  As I got to know some of these men, and even befriended one of them, I found this complexity of identity to be so interesting.  I had left the Catholic church shortly after arriving on campus, but I have the utmost respect for people who balanced two important pieces of themselves without compromising others.

That being said, Jasper is a great character in this complexity that he embodies.  I thought I would find any religion challenging to see beyond in this novel, but that was not at all the case.  Jasper is sincere in his commitment to God and in his love for Nicky, and I admired that there were no easy answers in this novel that required him to ignore who he was and what he believed.

Nicky is such a broken young man, and he so desperately wants to be healed.  He carries the marks of Jasper in his heart and on his skin, and sometimes he broke my heart.  He is a raw character, and his hurt is right at the surface, and I found him to be utterly captivating.

Beyond the fascinating look at religion and attachment issues, this was, at its heart, an amazing and raw love story.  As is only fitting given the characters, there is a slow build to the sex, but when it hits the page, it was remarkable.  This book kept me up into the night and it lingers in my mind days after it was done.  I feel like Nicky and Jasper are there on their island, and I can’t help but wait to see the amazing journey their love is taking.

There is an excellent collection of secondary characters, and the plot is engaging and well paced.

Don’t miss this excellent read.  Carve out some time on 9/10 because Nicky and Jasper have a lot to share with you.

Posted by Danielle at 6:22 PM No comments:

Coming 9/9: Valor on the Move by Keira Andrews 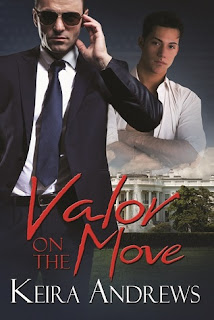 Title: Valor on the Move

Lock this book up: 3 keys.  The sex is hot and supports the story

Synopsis: Growing up gay in the White House hasn’t been easy for Rafael Castillo. Codenamed “Valor” by the Secret Service, Rafa feels anything but brave as he hides in the closet and tries to stay below the radar in his last year of college. His father’s presidency is almost over, and he just needs to stick to his carefully crafted plan. Once his family’s out of the spotlight, he can be honest with his conservative parents about his sexuality and his dream of being a chef.

It’s definitely not part of Rafa’s plan to get a new Secret Service agent who’s a walking wet dream, but he’s made it this long keeping his desires to himself. Besides, it’s not like Shane Kendrick would even look at him twice if it wasn’t his job.

Shane’s worked his way up through the Secret Service ranks, and while protecting the president’s shy, boring son isn’t his dream White House assignment, it’s an easy enough task since no one pays Rafa much attention. He discovers there’s a vibrant young man beneath the timid public shell, and while he knows Rafa has a crush on him, he assures himself it’s harmless. Shane’s never had room for romance in his life, and he’d certainly never cross that line with a protectee. Keeping Rafa safe at any cost is Shane’s mission.

But as Rafa gets under his skin, will they both put their hearts on the line?

Impressions:  Keira Andrews is an auto-buy for me, and this book supports that life philosophy.

I started this book this morning, and I read it so quickly I had to double check the length.  It was definitely a novel, I just loved it so much I couldn’t put it down!  This was delicious escapism, and I loved every moment.

Rafa was so endearing and innocent, but I really loved the strong core he had.  He set his needs aside for years, but when push came to shove, he stood up for himself and the man he loved.

Shane was also super sexy and totally believable in his love for Rafa.  I respected his concerns, all totally valid, but I loved the journey he went on to find his happiness.

I loved the details about the White House and the first family, and I enjoyed the suspense and action.  What really made this a great joy to read was the slow burning love between Rafa and Shane, and the filthy, delicious talk that both men shared.

Posted by Danielle at 7:48 PM No comments: 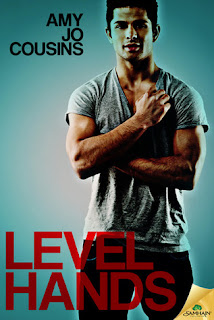 Lock this book up : 3 keys out of 5.  The sex is hot and supports the storyline.
Length: Novel

Cover Impressions: I love it- and all of the other covers too!

Best Line: "You're better at this than I am.  Being together."

Synopsis: Rafael Castro is so far out of his element he can’t even see it anymore. Carlisle College in Massachusetts is a long way from his Chicago home, even farther from his Dominican Republic roots.

The only thing keeping him attached to his last nerve is the prospect of seeing Denny Winslow again. The first time they met, Denny taught Rafi to fly across the water, rowing hard in a knife-like boat. Now, two years later, on the wings of a rowing scholarship, Rafi is attending Denny’s elite college.

Even before the excitement wears off, Rafi is struggling with classes and fending off rumors that Denny’s family, not Rafi’s talent, won him his spot. To quash the gossip, Rafi tries to steer clear of the man he wants. A plan that evaporates in the fire of renewed attraction.

But Carlisle’s academic pressure cooker has Rafi barely treading water. And when a family crisis hits, both Rafi and Denny must pull hard to keep their relationship from capsizing in rough waters.

Impressions:  I was so excited to see this addition to a series that I love.  While all of these books have dealt with flexibility, or the importance of bending, none fit the title as well as this one did.  Rafi is a great character, and he holds himself together so tightly.  In Chicago, he was the gay kid trying to better himself while he lends support to his sisters.  At Carlisle, he is a brown, gay kid who is determined to prove to others that he has earned his place there, even if in his heart he is afraid that he hasn't.  He is almost brittle in the way that he holds himself so tightly together, and it is that guard that really shows his inner frailty.  He is so afraid of loosening that hold that it almost costs him Denny, a man he isn't sure he can let himself need.  Eventually, Rafi realizes that if he does not bend, he will break- quite literally.  It is only when he lets his own guard down a little, enough to ask for help, that he is able to really find his strength.

Denny has loved Rafi since he was 17, and he is patient and loving, and so aware of Rafi's battles with himself.  He tries to stand up when he is needed, and step back when Rafi's battle with himself gets to be too brutal to allow him in.  What made me love Denny is that he knows that he has to be careful of bending too much, and he is clear with Rafi when the bending is getting to hard.  This made me really respect and care for Denny, because he wasn't a two dimensional hero for Rafi.

I loved the complexity of Rafi.  He faces microagressions and comments from the kids around him, and sometimes it is clear that all he can rely on is his own pride.  At a quick glance Rafi might seem overly paranoid or caught up in how others see him, but Rafi is like hundreds of kids that I know and teach on a daily basis.  These comments hit Rafi in a place that defies logic, and his self consciousness about his class, his race and his sexuality make total sense.  Does he over generalize about all white, preppy kids?  Sometimes.  Does he feel overly sensitive about how others see him?  Yea.  But that is all really how Rafi sees the world, and part of that is a defense mechanism that he needs.  Rafi's issues are all about perception, not logic.  I found him to be a great and relatable character, and I applaud Cousins for creating someone who is so strong and yet so paralyzed by his own fears.

This can be read as a standalone, but why would you do that?  Books 1-3 are amazing, and I have it on good authority that there is more of this great series to come.
I'll admit, before the series started I was wary of reading an MF novel (which 3 primarily is) but TRUST ME, you will fall in love with ALL of these guys, and no matter the pairing, all of these books are queer and amazing!

Highly recommended!
Posted by Danielle at 9:05 PM No comments: