*** This title was kindly provided by Riptide Publishing via NetGalley in exchange for an honest review. *** 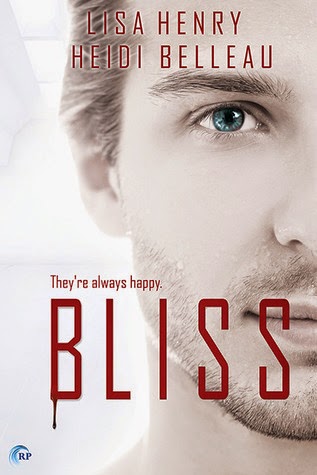 : 4 out of 5 stars.  WOW this book is HOT.  The sex definitely supports the story in a meaningful way.

Cover Impressions: I love it.  Totally fits the story.

Best Line: "Because I told you I wasn't done with you yet."

Rory James has worked hard all his life to become a citizen of the idyllic city-state of Beulah. Like every other kid born in the neighboring country of Tophet, he’s heard the stories: No crime or pollution. A house and food for everyone. It’s perfect, and Rory is finally getting a piece of it.

So is Tate Patterson. He’s from Tophet, too, but he’s not a legal immigrant; he snuck in as a thief. A city without crime seems like an easy score, until he crashes into Rory during a getaway and is arrested for assaulting a citizen. Instead of jail, Tate is enrolled in Beulah’s Rehabilitation through Restitution program. By living with and serving his victim for seven years, Tate will learn the human face of his crimes.

If it seems too good to be true, that’s because it is. Tate is fitted with a behavior-modifying chip that leaves him unable to disobey orders—any orders, no matter how dehumanizing. Worse, the chip prevents him from telling Rory, the one man in all of Beulah who might care about him, the truth: in a country without prisons, Tate is locked inside his own mind.

Impressions:  I have been excitedly awaiting this book, as I love both Ms. Henry and Ms. Belleau's work, so put them together...in the future...with microchips and dystopias?!  Oh, hell yes.  Sign me up.  I was not wrong, but this was even more than I imagined!

First of all, let me warn you this book is HAWT.  Like, steaming up the kindle screen hot.  That being said, the sex isn't gratuitous and it totally fits in the story.  The sex is dub con, given the context of the book, but given Rory's ignorance of the situation, the moral ground is really gray.  I enjoy dub con in the right context, and this worked great for me.  Tate is also then faced with an aspect of his own personality that he had never considered before.

I found that aspect to be one of the most interesting.  This book really made me think about the moral grey ground that Rory and Tate are experience.  I thought their ability to deal with the aftermath of this situation was realistic and believable.

The world building is really well done here.  I found Beulah to be a world that I could easily imagine, and I would have loved to learn more about Tophet (maybe in a future book?) because the settings of this book are detailed and realistic.

One of the things that I really liked about the book was how tight the plot was.  Both authors did a great job of setting up a complex story.  The MC's were three dimensional and flawed, and their unique situations (being from Tophet, other medical issues in Tate's case) explained why they had a unique experience when it came to dealing with these chips.  Rory is an outsider, and I could see how he would be swept into the beauty that Beulah seemed to be, and yet still maintain his ability to question.  The character of Aaron was  great piece of this, as it forced Rory to really question what he sees.  I loved that Beulah was not a land full of villains, but it was a city where people who are given too much power can abuse it.

I stayed up until 2:00 AM to finish this book (and those of you who know me, know I am an old lady with a regular bedtime!) so this says a lot about how much I found myself captivated by this great story and these likable, complex MC's.

My only want would be more information about their future lives, and maybe a little bit of a bridge from the end to the epilogue, though I loved seeing Rory and Tate together, I wanted to see a little bit of how that work was done by them.

This is a highly recommended read!  If a dystopia is a little outside of your comfort zone, you have to go for it!  The romance and character building in this book will not let you down!  If you already like dystopias and hot men...what are you waiting for?!

This review is posted on Amazon and Goodreads.