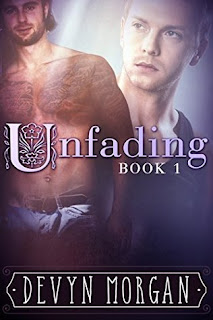 Lock this book up: 3 keys,  there is enough sex to suit the plot

Cover Impressions: The looks is clean and professional

Synopsis:Logan Walters is used to attention. He waltzes through life in his tight jeans slung low on his hips, everyone's appreciative eyes upon him. He can practically hear hearts break when walks out on his conquests. Once he decides to get a tattoo, he knows it'll make him feel complete - all grown up. Except in a heartbeat, Logan - beautiful, arrogant Logan - is nervous, and he can't understand why.
Connor Dixon gave up on finding true love. An award-winning tattoo artist, he's traveled across the country, guesting at many parlors but never staying too long. His last relationship ended like they always have: his boyfriend was cheating on him. But his reservations fly out the window when he sees Logan for the first time. Is he really falling for this guy, so cute but so vulnerable at the same time? Logan and Connor can't stop the intense mutual attraction and what inevitably follows, but it's not all smooth sailing. Bad habits die hard, and Logan's insecurities rise up to deal a devastating blow to their budding relationship...

Impressions:  I had a hard time with this series, and though the writing was strong, and I liked some aspects, I had an overwhelming dislike for Logan, and he never redeemed himself in my eyes.  I found him to be so selfish and shallow, that it was hard to hope for an HEA involving him.

Connor was a likable character, and I ended up wishing that he might get sick of Logan's attitude and find his own Mr. Right.

Despite this, the writing was strong, and other people might have a better time connecting to the text than I did.

Email ThisBlogThis!Share to TwitterShare to FacebookShare to Pinterest
Labels: book review, Not my cup of tea