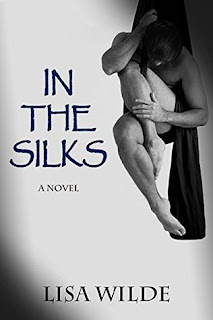 Title: In the Silks

Cover Impressions:Do I really need to comment?  It is GORGEOUS!

Best Line: "Ryan pushed his face into the space between Henry's head and the door. 'I love you too, by the way.'"

Synopsis: Juvenile probation officer Henry Hayes lives an existence anchored to a deep sense of obligation and guilt. A one-time college experience his only taste of freedom, he submitted to what he thought his life should be. Years later however, a chance encounter with the one person who had given him that small taste of what his life could be throws his narrowly defined existence into questioning everything. Can he free himself from his self-imposed sense of obligation and self-denial to embrace real happiness? Even if it comes with a mountain of troubles and wrapped in silk?

Ryan Mallory is living his dreams as an aerial contortionist, living in NYC and traveling the country. Sidelined by an injury, he has to face hard truths about his life. When someone from his past reappears at the height of his problems, Ryan questions what he thought he knew and wanted. Can a small piece of his past become a large part of his future and help him heal what is broken?

Impressions: Ever since I first saw Cirque du Soleil, my mind has craved a story like this!

This story is Wilde's debut novel, and it is wonderful!  It begins with a brief encounter between Henry and Ryan in college, and then the majority of the novel takes place several years later, after Henry comes across Ryan at a performance.

Henry has grown into a young man who has put his own needs aside in favor of being a good and reliable son.  His career plans have morphed and he now works in a career where he provides support to teenagers who are trying to get back on their feet.  Ryan is a performer, but he lives hard and parties harder.  In the years that have passed, though their lives have changed, in some ways it seems as if both men are in a holding pattern, and when they come together again, their growth can really continue.

I was swept along in the story of these two men.  I was captured from the beginning, and though I anticipated being drawn to Ryan the most, I think Henry's sweetness, compassion, and yearning to be loved really won be over in the end. His scenes with his family were so realistic, honest, and believable that I felt like I was sitting right next to him.  I felt like I *knew* him and his family, and I loved their relationships.

Ryan shows such growth, and while he could easily have been written in a collection of stereotypes, Wilde creates Ryan as a complex and evolving man, and I loved watching him realizes that he had some growth to do as well.  It reinforced the idea that both of these men have a chunk of their journey that they must do on their own, and yet each of them can and will support each other through the parts that they can.  I really liked Ryan's continuous evolution, and I respected that his journey concluded in an original and realistic way.

The storyline moved at a great pace, and the writing was engaging and very well done.  I loved the realistic dialogue and I adored reading a book that was set in my neck of the woods (Boston! woohoo!)

I would be remiss if I didn't mention that this book is also romantic and very sexy!  Sex + aerial silks?  Oh yea, Wilde went there...and you don't want to miss it!  The sex is great and totally supports their relationship and character growth.

Don't miss this debut author's work.  It was a great read, and it is highly recommended!  I already have my eyes out for her next release!