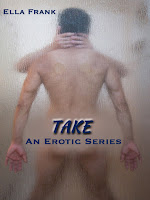 Cover Impressions: They get better as they go along.  They are hot.

Best Line: “You make me want things that I’d forgotten I wanted.”

Synopsis: TRY: Sex. Logan Mitchell loves it, and ever since he realized his raw sexual appeal at a young age, he has had no problem using it to his advantage. Men and women alike fall into his bed—after all, Logan is not one to discriminate. He lives by one motto—if something interests you, why not just take a chance and try?
And he wants to try Tate Morrison.Just coming out of a four-year marriage with an ex-wife from hell, a relationship is the last thing on Tate’s mind. He’s starting fresh and trying to get back on his feet with a new job at an upscale bar in downtown Chicago.The only problem is, Tate has caught the unwavering and unwelcome attention of Mr. Logan Mitchell – a regular at the bar and a man who always gets what he wants.Night after night Tate fends off the persistent advances of the undeniably charismatic man, but after an explosive moment in the bar, all bets are off as he finds his body stirring with a different desire than his mind.As arrogance, stubbornness and sexual tension sizzles between the two, it threatens to change the very course of their lives.Logan doesn’t do relationships. Tate doesn’t do men. But what would happen if they both just gave in and…tried?

TAKE: Logan Mitchell is a man who’s always been more than happy to take what he wants. It’s a philosophy that’s proven lucrative in both his business and personal life, and never was it more apparent than the night he laid eyes on Tate Morrison. After pulling out all the stops and convincing the sexy bartender to give him a try—he’s hooked.
Now, Logan finds himself in a predicament that demands more from him than a smart-ass answer and his innate ability to walk away when things get too deep.
He has a choice to make, and it’ll force him to do something he’s never done before—take a chance.

Tate Morrison knows all about taking a chance. He took the biggest one of his life the night he showed up at Logan’s apartment to explore his unexpected reaction to the man.
Ever since then, he’s thought about little else.
At first he was convinced his attraction was based solely on his body’s curiosity. But the more time he spends with the silver-tongued lawyer, the more Tate realizes that their physical chemistry is only the beginning.
He’s starting to catch a glimpse of what life with Logan would be like, and it’s one full of excitement and satisfaction—a far cry from what he had in the past with his soon to be ex-wife.

Each man will face their fears as they begin to understand the true meaning of give and take. Their feelings for one another will be tested, as will their very beliefs. But now that they’ve found love where they least expected it, will they be brave enough to reach out and take it?

TRUST:  Up until now, Logan Mitchell has never had much of a reason to trust anyone.Having struggled with a self-identity crisis throughout college, he’s spent the years since then creating a sophisticated facade to present to the world.It’s an armor he thought was impenetrable—until he met Tate Morrison.The gorgeous, headstrong bartender he’d sat across from only months ago has taken a tight hold of his heart, and Logan is discovering that it’s time to let go. It’s time to let someone inside.After years of placing his dreams on hold for his family, Tate has finally chosen to do what makes him happy and follow his heart. The one thing he never would’ve imagined was that it would lead him into the arms of a man—and not just any man—the striking, never-takes-no-for-an-answer Logan Mitchell.Tate has fallen hard, and as his world is turned on its axis and they move forward together, he finds his life becoming more entwined with the confident, successful lawyer.Even though neither man expected the other, it’s time to trust in their relationship—but not everything comes so easily.

Once I started Try, I moved right along to Take and Trust.  The fit together seamlessly, and each book drew me in deeper.

If you, like me, have made the mistake of holding off, or (gasp) skipping over these books, don't wait any longer.  This series will draw you in and hold you tight until you reach the last page with a smile on your face.