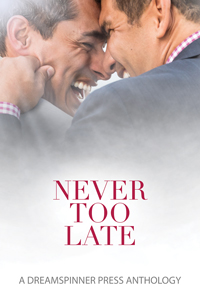 Dream spinner Press released an Anthology about finding love later in life.  All of the stories are available individually, or you can purchase the anthology at a discounted rate from Dreamspinner.  I was fortunate to review several selections from this anthology, and I recommend the following:

Anthology Summary: There’s something to be said for maturity and experience, whether it’s a second chance at love, a May/December romance, or finding a soul mate later in life. These stories prove that it’s never too late for a new love

Synopsis: When a stranger runs into Douglas, makes him spill his coffee, and offers to buy him another one, Douglas thinks that’s all it will be. Even though the man is gorgeous. Even though his daughter has other plans. Turns out, the stranger, Anthony, has other plans as well, and Douglas soon agrees to go to a movie with Anthony. It’s absolutely not a date. Douglas has slept with men, sure, but he isn’t gay. Or bisexual. No matter what Anthony says.

However, a late night and a frank conversation with his daughter’s best friend leaves Douglas with a different opinion. Not that he plans on letting Anthony know he considers it a date. It’s too much fun to wind Anthony up. After one not-so-perfect date, Douglas thinks maybe if he keeps Anthony around, turning fifty won’t be so bad.

Rating and Thoughts: 3 Stars.  Not bad, but I didn't connect as strongly to the MC's as I had hoped.  I think a little of the awkwardness of David made him a little unlikable to me.

Synopsis: The day Glen Carson loses his wallet is the day that changes his life. The wallet is returned by Aston Walsh, a man he hasn’t seen for twenty years. He and Aston had a passionate and intense romance when they were in their late twenties, and Glen thought their love would last forever. But his dreams were horribly shattered by a shocking confession from Aston, and they parted for good—or so Glen assumed. Now, two decades later, they’ve lived many years apart, created new histories, and built successful lives. Yet the spark between them is still there. Aston wants a second chance with Glen, but Glen is more cautious this time around. He has to decide if Aston’s regret is genuine, and if surrendering his heart to Aston again is worth the risk.

Rating/Thoughts: 4 stars.  I loved these guys, and I love London's writing.  The cute "British-ness" of these guys melted my heart!

Synopsis: James Carter is forty-five and has been a police officer most of his life. He married young, lost her young, and his life revolved around his work and his son. Young is a recurring theme in his life, he thinks, when he meets the considerably younger AUSA Derek Moore on a case and finds himself ruled by the whims of his heart.

The road to love between a hotshot lawyer and a veteran cop was never going to be smooth, not in the real world, but there are criminals, misunderstandings, and a lack of communication standing in their way too. Both are so stubborn and convinced their interest is one-sided that it takes a murder case, exhaustion, and an adjournment for them to get their act together. They move fast after that, but they both know there’s no guarantee for tomorrow.

Rating/Thoughts: 3.5 Stars. I really liked this this story, though at parts it moved a little slowly for my taste.  The pace definitely picked up and I'm glad I chose it.

Selection #4: Out In the Blue by Kelly Jensen

Synopsis: At forty-five, Jared Tailler suddenly feels old. When his employer grounds him, he starts thinking in terms of measuring his coffin. Well, not quite, but he’s creakier and hairier than he was ten years ago, and his closest relationship is the one he has with his frequent-flyer card.

It’s time to get out there.

On the first day of a five-day hiking trip, he meets Finley Macrae, a younger, seemingly brighter man. As they inch together in halting steps, Jared learns he’s not the only one lost out in the blue—Fin’s good cheer hides a turbulence deeper than Jared’s midlife crisis. Maybe together they can find the trail to happiness.

Rating/Thoughts: 5 stars.  I *love* Jensen's Chaos Station series, so I was eager for this one.  Though it is completely different from that series, I also loved this story.  The men are older, and I loved seeing characters who were dealing with life issues that we all face as we grow older.  I'm not a hiker, but I loved the setting.

Synopsis: On the train from Lancaster to Philadelphia, Trent runs into Brit, his first love and the first man to break his heart. They’ve both been through a lot in the years since they parted ways, and as they talk, the old connection tenuously strengthens. Trent finally works up the nerve to call Brit, and their rekindled friendship slowly grows into the possibility for more. But both men are shadowed by their pasts as they explore the path they didn’t take the first time. If they can move beyond loss and painful memories, they might find their road leads to a second chance at happiness.

Rating/Thoughts: 4.5 Stars.  Grey always delivers when it comes to writing great characters, and this story was no different.  I loved watching these two get a second chance, and the story was filled with emotions and love.

Synopsis: First a soldier and then a diplomat, Juberi now spends his solitary days on a single ambition: trying to resurrect the phoenix, which has been extinct for centuries. He’s not pleased when he is obligated to attend a public ceremony in memory of an elderly friend and former colleague. But at the ceremony, Juberi meets the friend’s beguiling son, Desen. Despite being from a markedly different culture, Desen has much to offer. But after decades of denying his own desires, Juberi fears there is no alchemy that will reopen him to love.

Rating/Thoughts: 3 Stars.  I think the issue with this was partly mine.  The writing was great (as it always is with Fielding!) but I didn't enjoy the setting as much.  I like the mythology of the Phoenix, but the magic partly took away from the love story for me.

Selection #7: Saints Save A Sinner by Dawn Douglas

Synopsis: William Arthur Ainsworth, second son of the Earl of Cannahan, has just purchased a Lieutenant’s Commission in the Coldstream Regiment, British Foot Guards. A new officer, Will shows promise and is taken in hand by experienced Scottish Sargent Duncan Blair. Friendship grows into affection and desire as the men fight the French from Egypt to Sweden and back to the Spanish Peninsula through the six coalitions of the Napoleonic Wars. A bloody defeat in Spain and tragedy at home pull William away from service in the British Army and turn him from an officer to an earl, but status, time, and distance combined can’t change Will’s feelings for Duncan. When a hard-won peace is finally achieved, Will realizes the most important mission he may ever undertake will be convincing Duncan that the end of the fighting can mean the beginning of their lives together.

Rating/Thoughts: 5 Stars.  I love historical like this, and this one literally swept me away.  These guys really earn their HEA, and this one was a standout for me.

Selection #8: Until I Found You by B.G. Thomas

Synopsis: Christopher Morin is unlucky in love. The only male worth anything in his life is his sweet dog Frost. Christopher is devastated when, shortly after his breakup with the worst boyfriend ever, his dog vanishes without a trace.

Doyle Schilbrack was lucky at love, until his wonderful partner of many years passed away, leaving Doyle lost and lonely. The solution? He adopts a sad little abandoned dog, a dog he names Jack. Together, man and dog come back to life.

Then one day, a year later, Christopher encounters Doyle in a park—walking his dog! Now the two men are faced with a dilemma. They want to do what is best for their dog, but it will break their hearts to let him go.

But then a rambunctious white Pomeranian takes matters in his own paws. There might be a way for both men to keep the dog, and find something else that’s been missing from their lives.

Rating/Thoughts: 4.5  Really adorable story.  I love later in life coming out stories, and between the dog and the romance, this one will leave you smiling!

Selection #9: Up To Boil by Tia Fielding

Synopsis: When plumber and builder Jordan Novotny goes to take a look at the home of the town’s openly gay, recently dumped librarian, he doesn’t expect to find anything other than a falling-apart old house and a water heater in need of repair. Instead, he finds an older man in need of some TLC and a new circle of friends after his ex tossed him aside for a newer model. Stephen might be attracted to Jordan, but he thinks the young man is exactly that—too young. It takes Jordan’s family interfering and a bit of a mishap to make them see that it’s never too late to find a new love, and that age is just a number. All that matters is compatibility and the courage to take a chance.

Rating/Thoughts: 3 Stars.  The premise was cute, but the age gap was really big for me.  I think as someone who works with people in their early 20's it was hard for me to connect with an MC who is 30+ years older than the other MC.  I kept wondering, but what about the next 30 years?  Some people will love this one, as the characters are cute, but it wasn't my favorite.

Synopsis: If he can make room in his life and his heart, an isolated medieval history professor might find a real life knight in shining armor.

A terrible breakup in his early thirties left David shying away from relationships. For years he’s been content with his solitary life, finding fulfillment in his career, books, television show marathons, and his cat’s companionship. When David meets his neighbor Zach, he can’t tell if Zach is just being friendly or if the handsome fireman might actually be interested in him. The more time they spend together, though, the more David questions his resolution to remain single. If Zach can extinguish the flames left by David's past, David might finally break away from his structured life and take a chance on love.

Rating/Thoughts: 4 Stars.  This was so cute!  I'd love to see how these guys make out after the story ends.  This was an adorable matching, and I just wanted even more!

This is a great anthology, and I am sure that there are even more treasures to be discovered among these great reads!  Check these out, and don't miss some of the others!