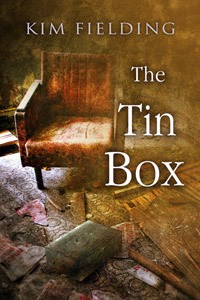 :  3 our of 5 keys,  Sex and Romance in proportional amounts

Cover Impressions: Gorgeous.  I love the feelings it evokes, and it matches the story totally.

Best Quote: "...it was always you who said we should run away together, run far from my disapproving family.  And ti was always I who reminded you we might starve if we do...If you come for me now, Johnny, I'm ready to run."

Synopsis (from publisher) : William Lyon's past forced him to become someone he isn't. Conflicted and unable to maintain the charade, he separates from his wife and takes a job as caretaker at a former mental hospital. Jelley’s Valley State Insane Asylum was the largest mental hospital in California for well over a century, but it now stands empty. William thinks the decrepit institution is the perfect place to finish his dissertation and wait for his divorce to become final. In town, William meets Colby Anderson, who minds the local store and post office. Unlike William, Colby is cute, upbeat, and flamboyantly out. Although initially put off by Colby’s mannerisms, William comes to value their new friendship, and even accepts Colby's offer to ease him into the world of gay sex.

William’s self-image begins to change when he discovers a tin box, hidden in an asylum wall since the 1940s. It contains letters secretly written by Bill, a patient who was sent to the asylum for being homosexual. The letters hit close to home, and William comes to care about Bill and his fate. With Colby’s help, he hopes the words written seventy years ago will give him courage to be his true self.

My Impressions:  I had this book on my TBR list for months.  I love Kim Fielding's work, but this sounded a little bit out of my comfort zone, and I wasn't sure that I could really get into.  Was I ever wrong!  When I started this book I simply could not put it down.  I had that feeling that many of us do that by pausing my reading I was forcing William and Cory to pause in their journeys.  What was interesting, was William experiences an element of that when he is reading Bill and Johnny's story.

What really grabbed me in this story were the brilliant characters of William and Cory.  The backstory of Bill's letters provides a heartbreaking glimpse into the terrible "treatments" forced on gay men (and lesbians) in the not-so-distant past.  This backstory is an extremely effective and powerful part of the story, but it was William and Cory who carried this for me, and who really stuck with me when I was done.

I love it when an author creates two main characters that equally carry the story, and Ms. Fielding definitely did that.  At first, it is William who grabbed my attention. Just dealing with his own sexuality, and caught between what he knows as a therapist and what he fears in his gut, William is simultaneously sympathetic and frustrating.  I really felt for him because he wants more than the loveless life he has known in the past, and as a reader, I want it for him too. When we meet Cory, he seems delightfully quirky and easy to love, but Ms. Fielding develops him so well too.  There is so much more to his character, and that three dimensionality really pushes the story very well.

I felt like I was late to the party on this one, and it was all my fault!  I cannot believe I carried this with me on my kindle of months before I truly discovered it.  I know I will revisit these guys at another time.  The secondary characters were wonderfully written too, and the two stories come together in a wonderful and impactful way.