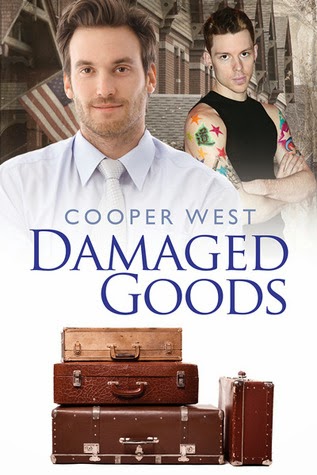 : 3 out of 5 keys, hot sex scenes that support the romance

Cover Impressions: Mehh.  I get the baggage thing, but it isn't really character appropriate, and I really don't like Templeton's tattoos.  I like Templeton in my mind more than this one.

Best Line: "But I figured out in the end that it doesn't matter whether I believe you.  You made a choice, and it wasn't me."

Synopsis:Professor Jesse Ford feels like a failure in both love and life. He's moved home to live over his mother's garage after his previous relationship ended in heartbreak and a minor academic scandal, derailing his career. Tired and disappointed, he holes up to lick his wounds and concentrate on his next book, determined to avoid anything having to do with love or romance.

Jesse starts to change his mind when he meets Templeton, the beautiful and engaging punk rocker working as a short order cook at their small town's popular diner. Templeton, a talented musician, is back in town after escaping from his abusive boyfriend back in Seattle where they had tried to start a band. Encouraged by friends and family, Jesse and Templeton realize they can't fight their mutual attraction.

The two men from very different worlds decide they might have a chance, but they find their tentative romance threatened by the many secrets Templeton is keeping, and Jesse's own bruised heart. When Templeton's dangerous ex shows up, both Templeton and Jesse have to decide whether their fledgling relationship can withstand facing the demons of their pasts.

Impressions:  I was very interested from the blurb alone, as I love a good tortured hero, and the only thing better than that is TWO tortured heroes.    Templeton captured me in this book, and he is what held my interest the most.  I found him to be a complex character who did not fit a cookie cutter mold of an abused man.  I loved the reveal about his secret, and I thought it really added dimension to him as a young man without options who could have been swayed by someone like evil ex-Cory.  Templeton is clearly a man with a series set of issues and challenges, but he had hope and nerves, and I felt like we got to see a side of him that was fun loving, strong, and still excited by the things life could offer him.  He may not have always trusted they would last, but I liked that he didn't shy from trying to trust again, even just in the friends he found.

Jesse wasn't my favorite MC ever, but I felt like I knew who he was for the most part.  I felt like he kept backing himself into a corner a bit, but his heart was in the right place.  I loved his mother, and several of the other secondaries, especially Jesse's old school friend and Templeton's boss.  Cory was evil to the core, and I enjoyed completely hating him.

I found this book a compelling read and I was eager to get back to it.  I wanted to see Templeton grab on to his fledgling optimism and make a go of it.  I felt satisfied at the conclusion and I enjoyed seeing some of the out-of-the-box endings these guys could finally get!