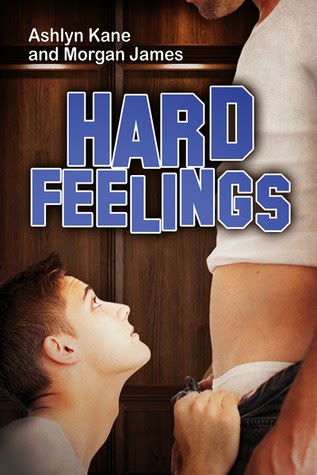 Cover Impressions: Adorable, and I liked it even more after I read the scene it was based on, and after I really knew the characters.

Best Line: "How did this even happen?  How could Rylan have been so blind that he missed this, the stupid swell of affection and happiness that had replaced the irritation he always associated with Miller?"

Synopsis: Rylan Williams hates conferences: too many people, not enough routine, and way too much interaction with strangers. When he gets stuck in a broken elevator with Miller Jones, the kid who fell asleep in his lecture, he figures things can’t get worse. Then Rylan realizes he’s the same guy he just spent an hour perving over from afar.

Rylan wants to await rescue in silence, but Miller insists on conversation, or at least banter. But just because they don’t get along doesn’t mean they don’t have chemistry, and Rylan breaks all his rules about intimacy for a one-time-only conference hookup. He’ll probably never see Miller again anyway. So of course, two months later Miller shows up at Rylan’s office, having just been hired to work on a new computer program—with Rylan.   And Rylan thought being stuck in an elevator with him was bad.   Soon Rylan and Miller learn that they get along best when they take out their frustrations in the bedroom. Their arrangement goes against everything Rylan believes in, but the rules are simple: Don’t stay overnight. Don’t tell anyone. And don’t fall in love.

Impressions:  After a surprisingly busy week, I needed something light to read.  I had downloaded Hard Feelings on my kindle, but I hadn't added it to my TBR pile yet.  I was expecting something light and fluffy, but I was SO pleasantly surprised. I thought I would blow through it, but once I started it I never wanted it to end!

Let me clarify, though, this book was not a sickly sweet romance by any means.  I loved the handful of angst combined with adorably delicious characters, both man and secondary, that I just wanted to hang out with.  Miller was geeky and dorky and everything I wanted, but there was so much more meat to this story, and to the character of Rylan, that this story really made me think.

Rylan's social awkwardness often presents as abrasiveness, and I loved getting into his mind, and seeing how he balanced his own desires with his discomforts.  There is a line where he talks about how Miller, always gregarious and easy going, doesn't push him to socialize of to be more chatty that he wants to be, but rather Miller comforts him and provides the security and acceptance he needs to feel at ease.  I thought this was a great insight into people who are stressed out by social situations, and because I don't ever feel that way, it really made me think about the people I know who may struggle as Rylan does.

This story was so captivating and entertaining, and so much more than the quick, fluffy read I expected.  The sex was HOT and totally added to the story and supported the characterizations.