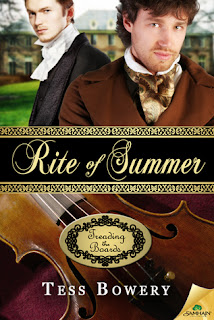 Cover Impressions: Love it! Bring on the ascots.

Synopsis:There are terrors worse than stage fright. Like falling in love.
Violinist Stephen Ashbrook is passionate about three things—his music, the excitement of life in London, and his lover, Evander Cade. It’s too bad that Evander only loves himself. A house party at their patron’s beautiful country estate seems like a chance for Stephen to remember who he is, when he’s not trying to live up to someone else’s harsh expectations.Joshua Beaufort, a painter whose works are very much in demand among the right sort of people, has no expectations about this party at all. Until, that is, he finds out who else is on the guest list. Joshua swore off love long ago, but has been infatuated with Stephen since seeing his brilliant performance at Vauxhall. Now he has the chance to meet the object of his lust face to face—and more.But changing an open relationship to a triad is a lot more complicated than it seems, and while Evander’s trying to climb the social ladder, Stephen’s trying to climb Joshua. When the dust settles, only two will remain standing…when they’re not flat on their backs.Warning: Contents under pressure. Contains three men, two beds, one erotic piercing, and the hottest six weeks of summer the nineteenth century has ever seen. (m/m/m - m/m).

Impressions:  I cut my romance-reader teeth on Regency romances, albeit the ones with corsets and raven tresses, so when I find a delicious looking Regency featuring breeches and more breeches, I jump at the chance to read it.

I expected a light romp in the 19th century, but Bowery's tale was much more than that.  Don't get me wrong, it was not at all light on the sex...and the sex was HOT. The many sex scenes from M/M/M to M/M left me feeling "...mmmmmm." They were great, and definitely fit the story appropriately.

What was done in this book that really set it apart for me was the attention to historical detail and to a historical mindset.  I loved the struggle some characters had with gay sex as an action versus an identity. Could two men love each other?  Was their connection only to be found through friendship and sex?  I also was fascinated by the details about the legal and social risks these men faced.  What must it have been like to see your peers and ex-lovers arrested and killed.  How did that affect your feelings towards romance and love?  What really impressed me was that Bowery investigated these very real issues and losses, but it was done in a way that never detracted from the romance between the main characters.

I really loved Stephen and Joshua, and I loved the details Bowery included when we were gifted from each man's POV (not through head hoping, but through their perspectives, and something so subtle as the names the men used to refer to each other (last names vs. first names) had such a powerful impact on understanding the evolution of their feelings for each other.

The details were so well done and so well woven into the story that they never pulled me from the romance which was front and center in this text.  The whole time I was reading I had a hope of where the story would go, and it was granted even better than I could have hoped!

Don't miss a chance to read this great novel!  You will not be at all disappointed!