Review: Prince of the Playhouse (Love in Laguna #3) by Tara Lain 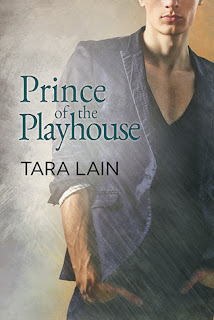 Title: Prince of the Playhouse (Love in Laguna #3)

Lock this book up: 3 keys.  This book is hot and the sexy times support the great romance.

Best Line: “You did it.  You decided what you wanted from life.  I just happened to be lucky enough to be hanging around when you did.”

Synopsis: Driven by his desire to become a successful fashion designer and concerned with hiding his questionable past, Ru Maitland lets his obsession with action movie star Gray Anson on the big screen replace his social life. Then obsession and reality collide when Ru is asked to design fashion costumes for a special performance of Hamlet at the Playhouse in Laguna starring none other than Gray Anson. Gray turns out to be a compelling mix of shy and brash and, despite a high profile engagement to a female socialite, the signals Gray sends Ru have his libido doing the salsa.

Gray Anson has what most people only dream of—great wealth, huge fame, a job he loves. For that, he’s given up any semblance of privacy and the right to say no to the thousands of people who depend on him and the millions who love him. He sees everything he’s ever wanted just outside the bubble of his life, but how can he make the compromises needed to embrace it? When Ru’s shady past crashes into Gray’s paparazzi-haunted present, both men have to learn that sometimes the only acceptable compromise is the truth.

Impressions: I love this series and I won’t admit to the volume of my squee when I saw this on the “Coming Soon” pages of Dreamspinner.  This novel is a great addition to one of my favorite series.

I have to admit, I don’t know that anything can beat out book 1 in this series, but each new book brings me back to the characters that I love and gives me a brand new couple to adore.  I really liked Ru in the past book.  He is sassy and stylish and carries an iron will.  When he got his own story, it was great to see more of what has made him who he is, and to see how he balances his past and his present.  I loved that he was getting the professional respect he deserves, and his story was much more complex than I anticipated.

One of the biggest difference in this book is that Gray is out to himself, but deeply closeted due to his family and career.  As we got to know him and his intricacies, it really made me understand and empathize with him.  Gray was sweet and sensitive, and I enjoyed his evolution.

This was a great book, and despite Ru’s story, it was a little more lighthearted than the first two.  As an English teacher, I loved all of the Shakespeare jokes and comments.

Don’t miss this installment in one of the best series being written right now!