New Release Review: The Shepherd and the Solici 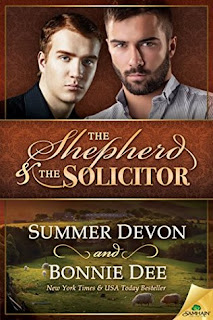 Title: The Shepherd and the Solicitor

Lock this book up: 3 keys.  The sex is hot, steamy, and totally supports the story

Cover Impressions: I love this whole collection, and the covers are classic.

Synopsis: When a storm is brewing, taking shelter could be the most dangerous move of all.

One careless, public sign of affection cost Daniel Pierce’s lover his life at the hands of a hate-filled mob. Grief-stricken, Daniel retreated from society to a sheep farm in the wilds of the north. Years later, Gregory Tobin erupts into his solitary life.
Sent to confirm the existence—or the death—of the Pierce family’s lost heir, Tobin isn’t sure he’s found the right man. The gruff, shaggy hermit calling himself Jacob Bennet bears little resemblance to photographs of the younger Pierce. Tobin needs more time to study his quarry.
With lambing season in full swing, Daniel grudgingly admits he could use an extra hand. Through a long, exhausting night, they parry back and forth as Tobin probes closer and closer to the truth. And something beyond casual attraction simmers between them.
They come together in a crash of desire, but ultimately Daniel must overcome the terrors of the past to reconcile the man he was with the man he’s becoming—a man capable of loving again.

Impressions: These authors are on my auto-buy list, and this book is a perfect example of why.  In no time at all, I was swept into the world of Yorkshire, in the 1880’s, as I watched one man learn to love again, and another realize that he has just settled for too long.

Daniel/Bennet has had a terrible trauma and in his past, and I can’t help but be impressed by his ability to reinvent his life.  I found it very believable that he would try to distance himself from all love and intimacy.

Gregory is a ray of light in Daniel’s cold world.  It was impossible not to fall a little in love with Gregory!  He is so earnest, enthusiastic, and optimistic.  He is also intelligent and loyal, and though he may not totally realize his own worth, he knows that he can give Daniel something that they both need.

Both men grow and evolve, and I felt engaged and connected through out the whole story.  This is a great collection of books which can be read in any order, and you won’t want to miss this addition!