5 Star Review: In the Middle of Somewhere 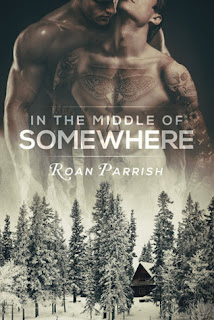 Title: In the Middle of Somewhere

Lock this book up: 4 keys...this one will keep you hot and warm your heart.

Cover Impressions: Do we need to say?  Its gorgeous and totally suits the novel.

Best Line: "I came here because I didn't have anywhere else to go.  Didn't have anyone.  And now...As long as I'm with you, I'll be home."

Synopsis: DANIEL MULLIGAN is tough, snarky, and tattooed, hiding his self-consciousness behind sarcasm. Daniel has never fit in—not at home with his auto mechanic father and brothers, and not at school where his Ivy League classmates look down on him. Now, Daniel’s relieved to have a job at a small college in Northern Michigan, but, a city boy through and through, when Daniel arrives in Holiday, Michigan, it’s clear that this small town is one more place he just won’t fit in.

REX VALE clings to routine to keep loneliness at bay: honing his large, muscular body until it can handle anything, perfecting his recipes, and making custom furniture. Rex has lived in Holiday for years, but his shyness and imposing size have kept him from connecting with people. Though he loves the quiet and solitude of his little cabin in the woods, Rex can’t help but want someone to share it with.

When Daniel arrives in Holiday, they are smitten with each other, but though the sex is intense and explosive, Rex fears that Daniel will be one more in a long line of people to leave him, and Daniel has learned that letting anyone in could be a fatal weakness. Just as they begin to break down the walls that have been keeping them apart, Daniel is called home to Philadelphia where a secret is revealed that changes the way he understands everything.

Impressions: This book swept me off of my feet!  I fell in love with Daniel and Rex, and I was hoping this would somehow turn into the Neverending Story and sweep me into the neighboring cabin.  I had this one on my TBR pile, and I am so glad I bumped it up because it was a great read.

The strength of this novel is in the character development.  There is certainly a plot, and it moves along nicely, but this is not a story about scary exes popping out of the bushes, or hitmen shooting from the roof.  This is a story about two men who haven't believed that they can get the happiness that we know they deserve.  Rex is a gentle giant of a man.  When he rescues Daniel, the sparks are instant for him.  He is such a kind and care taking man, and I just loved him.  Parrish did a great job in creating a man who has his own struggles with self image and circumstance, and who was sweet without being sappy or unreal.  Rex clearly cares for Daniel, but he has a hard time believing that anyone, let alone Daniel, could choose him.

Daniel is crafted just as expertly.  He is sometimes grumpy and abrasive, sometimes prickly and snappy, but always hoping for a love and acceptance that has been denied him.  As with Rex, he is three dimensional, and Parrish is transparent about his motivation without hitting us over the head with it.

This story carries us along in a gentle hug, and I never wanted it to let me go.  The secondary characters are great, and good or bad, they enhanced the story.  The story is told from the perspective of Daniel, but we get great insight into Rex as well.  Though at the beginning I really wanted more of Rex’s thoughts, the story worked well and it actually really helped to build my interest in Rex.  It suited the story to hear it from Daniel’s perspective.

The best part about this novel was discovering that there was more to come.  This is definitely an HEA, but there are other characters that I want updates on, and of course I want more of Rex and Daniel.

This was such an amazing read, and these guys gave me a warm, tingly book hangover.  I read around the clock because I couldn’t put it down, but I cringed to see the pages slip by because I never wanted it to end.

Don’t miss this one.  Highly Recommended.
Posted by Danielle at 3:04 PM