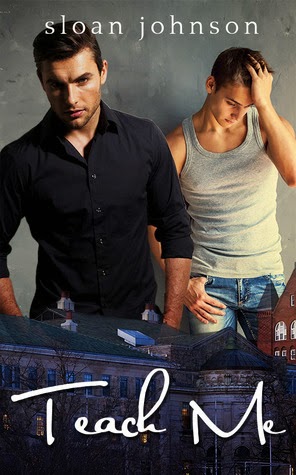 Cover Impressions: I like it.  Not totally how I pictured the MCs, but it has important elements.

Best Line: "I want you to teach me because I don't want to be that person."

Synopsis: Two words stripped Austin Pritchard of the privileged life he’s used to. The moment he uttered the words, “I’m gay,” he realized there is no such thing as unconditional love. Now, he’s gone from traveling the world with his family to living on the streets trying to figure out how he’s going to stay in school.
A chance opportunity changes everything. Austin impresses the foreman and lands a job, but even more, he catches the eye of David Becker, who is determined to teach him that true love doesn’t come with strings.
The only thing David had as a child was love. His family struggled to keep food on the table and a roof over their heads. That has driven him to stay focused on his goals; become a tenured professor at a university and save enough money to build a home of his own. It’s not until he sees an insecure college student working on his new house that he realizes that he hasn’t planned on someone to share his life with. He’s about to learn that everything he’s already accomplished is nothing compared to the task of making Austin see that he is worthy of love.

Impressions:  I really didn't know anything about Ms. Johnson's work, but the blurb I saw really interested me, and I was honored to get an ARC to review.

I'm glad I did!  I really enjoyed this story, and the love that bloomed between Austin and David.  I felt like I really knew Austin, and I loved looking at his life as a young man struggling to find a community of support for himself.  I was really intrigued by him, and I wanted to know more and more about him.

I enjoyed the romance that grew between these two men, and while I don't always like relationships where there is a big inequity in status between the two MCs, Johnson did a great job of making Austin strong enough, and David vulnerable enough, that I totally bought their love and 100% supported it.

This was a great book to escape with and I definitely recommend it!