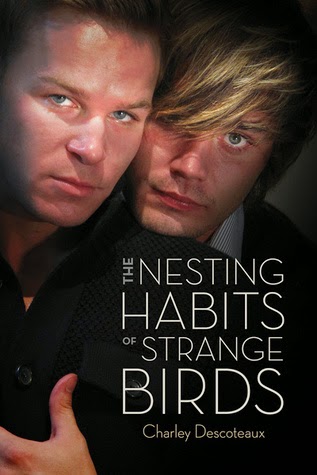 : 3.5 out of 5 keys, sex is hot and supports the connections between the characters

Cover Impressions: It's visually pleasing, but I think the direct eye contact makes me feel like it doesn't fit these guys.  I wish they were looking at each other.

Synopsis: All he ever wanted was to be a normal guy….
Phil Brask spends his days in the basement of his mentor's Victorian home, converting legal documents into electronic format. When the pipe feeding the water heater bursts, Lee Redding arrives in the plumber’s truck and draws Phil away from the narrow focus of his computer and camera lens. Lee gives Phil hope for a life beyond the walls he’s constructed using the nesting habits of migratory birds and dense legal files, a guided tour through a world filled with romance and music…maybe even family. But there’s a reason Phil retreated behind those walls, why he panics at a simple touch.
Lee has a good life—working with his uncle and on his mother’s farm, playing bass in a horrible metal band, and hooking up when he pleases—but he’s always suspected something was missing. When he meets the hot photographer with the icy-blue eyes, he knows exactly what that something is. Phil isn’t like other guys, but neither is Lee beneath his carefree exterior. Maybe Lee's the perfect guy to show Phil that everything doesn’t have to be done the hard way and "home" isn't a four-letter word.

Impressions: I was looking forward to this book when the blurb was first posted.  I really enjoyed it, but it was different in many ways from my expectations.

Let me start by saying that I loved Lee and Phil, as well as the secondaries like Jerry and Becka.  I expected this to be a book about a man with a traumatic past and the strong hero that steps in and sweeps him off his feet.   In fact, Luke has his own demons and challenges, and I felt that made him a much more complex, and likable, character.

These two guys go through a lot, and in many ways it brings them closer together.  I liked that it took us sometime to learn about their pasts, and there was a great tension between the two men.  It never felt burdensome or frustrating, but their feelings grew at a great, enjoyable pace.

There was a dream like quality to some of this book, and Decoteaux's writing was always clear, but sometimes made you work for elements of the story.  For instance, I wasn't always sure what to make of Lee's sister, but as the story progressed, it fit the story well.  While this was different from my expectations, I felt like it added to the overall feeling of the story, and the disconnect that Phil (and sometimes Lee) feels from the world.

The bottom-line is that these characters really grabbed me, and wouldn't let go.  I was eager to read it and to see where these guys go.  I'd actually love to see how these guys progress, and I'd love to see where some of the secondaries end up too!

Review posted on goodreads and Amazon too.