I'm back- With a 5 Star Review: Keira Andrews, Road to the Sun!

After a long hiatus, I am excited to return to the Watch and Word Society, and I am even more excited to kick off my return with a book review that you do not want to miss!

As some of you may know from Facebook, I took a new job this past year and though I love it, it has taken me some time to adjust to the schedule change! I am still a teacher, but I had the great fortune to work in my district as a specialist helping LGBTQ students and staff.  I provide professional development, consultation and support for students and staff in schools K-12.  It is very rewarding, and I love my job!  I have not stopped reading, and I am excited to get back to blogging about some of the books that have kept me going, even in the most challenging days!

To kick off the revival of the blog, I am so honored and excited to introduce the newest release from Keira Andrews, Road to the Sun. 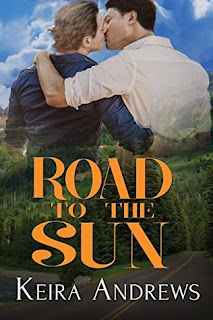 Title: Road to the Sun

Lock this book up: 4 keys- Andrews knows how to write some steamy romances, and this one lives up to that promise.  The heat supports a wonderful emotional connection in the story.

Synopsis: Jason Kellerman’s life revolves around his eight-year-old daughter. Teenage curiosity with his best friend led to Maggie’s birth, her mother tragically dying soon after. Insistent on raising his daughter himself, he was disowned by his wealthy family and has worked tirelessly to support Maggie—even bringing her west on a dream vacation. Only twenty-five, Jason hasn’t had time to even think about romance. So the last thing he expects is to question his sexuality after meeting an undeniably attractive park ranger.

Ben Hettler’s stuck. He loves working in the wild under Montana’s big sky, but at forty-one, his love life is non-existent, his ex-boyfriend just married and adopted, and Ben’s own dream of fatherhood feels impossibly out of reach. He’s attracted to Jason, but what’s the point? Besides the age difference and skittish Jason’s lack of experience, they live thousands of miles apart. Ben wants more than a meaningless fling.

Then a hunted criminal takes Maggie hostage, throwing Jason and Ben together in a desperate and dangerous search through endless miles of mountain forest. If they rescue Maggie against all odds, can they build a new family together and find a place to call home?

Impressions:  When I heard that I had the opportunity to get my hands on Keira Andrews' newest release I was ecstatic.  Not only was I about to embark on a work trip, I was looking for a book that could kick off my blog again, and I knew the timing couldn't be better!

Let me just say that I was planning to read this on a short flight from Boston to NY which turned into a 4 hour flight, involving 3 hours of sitting on the tarmac.  Normally, I would not enjoy this time on a hot, crowded plane, but when I began Road to the Sun, suddenly I was with Jason and Ben as they faced danger and suspense, and ultimately found love, and the time flew by! (faster than my plane for sure!)

Andrews is a master of creating complex characters, and she continued that with Ben, Jason and Maggie.  Ben was a well rounded character whose loneliness and yearning was palpable.  Not only was he stuck in love, he was stuck in a cycle of life where he could not move on.  When he meets Jason and Maggie, he is immediately drawn to the outgoing young girl and intrigued by her dad.

Maggie is adorable, and though she is very precocious, she is written as very realistic.  She is wiser than her years, but also responds to a challenging situation the way I think a child would.

Jason is the character that I fell the most in love with.  He is trapped, in many ways the similarly to Ben, but he is not aware of the boundaries he has set up in his own life.  He has focused on being a father so much that he has forgotten how to be a man, and when he meets Ben, this begins to change.

What catapults this slow burn into a firestorm is a suspenseful and stressful event that kept me on the edge of my seat.  I loved the pace at which the suspense was written, but the love story never suffered.

What I really loved was the time and space that was given o the developing relationship between these men and Maggie.  Though they were brought closer together by a traumatic event, I left the story believing that their love would last far beyond the healing from this event.  They were not defined by this event, but they found their way to an HEA.

This is a love story you do not want to miss!

Email ThisBlogThis!Share to TwitterShare to FacebookShare to Pinterest
Labels: children, coming Out, suspense