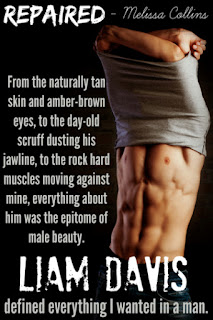 Cover Impressions: I can't wait to see it!

Best Line: "More than ever I was ready to face the possibilities of tomorrow."

Synopsis: Liam Davis is a man without a past. That’s what he wants everyone to believe, anyway. Hell-bent on erasing any memories of his previous life, he knows that starting over is all he can do. Hiding who he is, where he’s from, why he’s running, and especially who he’s left behind, Liam has run away from everything he’s ever known. His plan works perfectly until one day when Parker Ryan threatens to expose his carefully concealed world.
Parker Ryan is a man without a future. Sure, he’s a partner in one of New York’s most prestigious law firms, but he’ll never be more than a failure in the eyes of his boss, his father. Rather than break away from his father’s standards, he finds himself mindlessly pursuing them, in turn sacrificing anything that would actually make him happy.When Liam’s and Parker’s lives collide, the ugly truth about who they really are, and who they hope to become reveals itself when they least expect it. As both of their lives become wrecked beyond all belief, they’ll learn how to rely on each other in their journey to become Repaired.

Impressions: I have enjoyed Collins' other MM books, and this was no exception.  She excels at writing complex characters who are struggling to find their own happiness, and these MC's were the same.  Both of her men are tough, strong, and so much in need of being repaired.  From the outside, they seem to have it all, but she draws them in a way that allows us to see their self fears and needs.

Liam captured my heart, and I really enjoyed seeing him develop his inner strength.  I loved his "found" family, and they added a great element to the story.  Gabe was  great friend, and Paulie was a great mentor.  I felt badly for him, and I could see his fear.  Though part of me wished that he had been able to stand up to his demons sooner, I am glad that he did eventually face them.

Parker also followed his heart, and I found it believable that these men would find each other and learn to rely on their love and trust together.

This is a romantic tale that will pull you out of your life and let you escape from reality in the most delicious way.