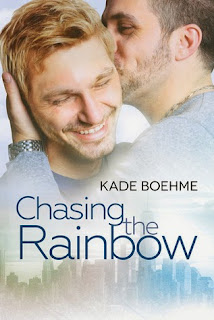 : 4 out of 5, the sex is hot and fits the story perfectly

Best Line:  "I was chasing this rainbow. And everyone saw it...
But now. Now I found you and fuck the rainbow. It’s like I’m walking into the sun"

Synopsis: Bobby Gugino realized he may have met the man of his dreams in Jody Olsen, only neither of them were gay, so far as Bobby knew. But when Jody came out and ended his marriage, Bobby's entire worldview was skewed, and his own health issues lead to his own coming out. Fast forward four years and Bobby runs into Jody again, but Bobby may be too busy making up for lost time to see how great they are together.
Jody Olsen's got guilt and mommy issues, but his coming out was smooth and his life had settled into a mundane pattern of kissing frogs while waiting for prince charming and helping run his mother's book store in New York's East Village. When Bobby comes bumbling back into his life with a surprising shared passion for the written word and an endearing love for sugary Frappuccinos, Jody can't help but be quickly swept up by the man.
The struggle to be patient with Bobby and his being unsure about being committed to someone is not an easy one. Does Jody hope for his happy ever after with Bobby, or is the lure of chasing the rainbow too much to fight against?
Includes a fresh-faced divorcee with his nose in romance novels and his heart in the clouds, a thirty-something fresh out of the closet, chasing a missed youth and trying to find his place in the big gay world he'd missed out on... and a little dirty suit sex.

Impressions:  After reading The Knight of Ocean Avenue I have had a craving for clueless butch guys in construction realizing that they have to be true to themselves and their men, and this book is another gem in that vein.

Bobby was an endearing guy who is trying to find his way in the world as a somewhat-out gay guy.  As he is juggling his sexuality, his family, and his own desires, he is shocked to realizes how much Jody captures his attention.  Watching Bobby and Jody fall in love and sharing in their journey as they figure out a way to have it all was simply wonderful.  This was a good old fashioned love story that kept me glued to my kindle and smiling with each page tap.

I loved the cast of characters, and I appreciated that Boehme drew them as complex and conflicted people dealing with their own struggles.  Though this was a charming and enjoyable story, nothing about it was pat or routine, and that's what made it a story that I will come back to again!